That study (Assistance Publique-Hôpitaux de Paris and La Pitié) showed that of 11,000 patients hospitalized with the virus, just 8.5 percent were smokers – a significantly smaller proportion than the 25.4 percent of the general French population who smoke. 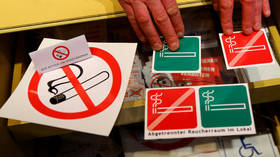 FILE PHOTO. ©  REUTERS/Leonhard Foeger
In a reversal of prevailing Covid-19 wisdom, a French study appears to show smokers are less at risk from the virus, affirming the results of an earlier Chinese study. The data aren’t conclusive – but they’re certainly surprising.

Nicotine may protect smokers against the coronavirus, according to a paper published on Tuesday in the French Academy of Sciences’ Biology Reports. Studying 482 patients hospitalized with Covid-19 in Paris’s Pitié-Salpêtrière hospital, the researchers found just 5 percent were daily smokers – far lower than the 25.4 percent of the French population who smoke daily.

While the results cannot be considered conclusive evidence for nicotine protecting smokers against coronavirus – the study size is small, and did not include patients in intensive care – they “strongly suggest that daily smokers have a much lower probability of developing a symptomatic or serious infection with Sars-CoV-2 compared to the general population,” the paper’s authors argue.

“Basically, we have 80 percent fewer smokers in Covid patients than in the general population of the same sex and the same age,” researcher and internal medicine specialist Zahir Amoura told France Inter on Wednesday.

While nicotine playing the hero in a viral epidemic affecting the lungs sounds counterintuitive given the known detrimental health effects of smoking, the study’s conclusions are supported by more extensive data collected from the Assistance Publique-Hôpitaux de Paris and La Pitié earlier this month in France. That study showed that of 11,000 patients hospitalized with the virus, just 8.5 percent were smokers – a significantly smaller proportion than the 25.4 percent of the general French population who smoke. Unlike Amoura’s study, however, this one did not control for age or sex.

The French studies support the results from two Chinese papers published in February, both of which found the percentage of smokers among Covid-19 patients was considerably lower than among the general population. A later Chinese study published in the New England Journal of Medicine, found that only 12.6 percent of its 1,000 Covid-19 patients were smokers, even though smokers comprise 28 percent of the Chinese population.

Smoking was initially believed to increase the risk of contracting the coronavirus, due to the virus’s affinity for an enzyme called ACE-2, which is found in greater numbers in smokers.

However, the virus also targets nicotine acetylcholine receptors found in the lungs, which are binding sites for nicotine. By binding to the same receptor used by the coronavirus, nicotine from cigarette smoke could actually stop the pathogen from entering the smokers’ lungs, neurobiologist Jean-Pierre Changeux, one of the researchers on Tuesday’s study, told AFP.

As promising as these studies sound, no one should go out and pick up a pack of cigarettes to protect against the virus. While Changeux and Amoura’s group is seeking approval to test nicotine patches as both preventive care (for healthcare workers and others likely to be exposed to the virus) and therapy (for those who are already sick), their paper warns readers that “smoking causes severe pathologies and remains a serious danger to health.”

Tobacco smoke contains many other toxic chemicals aside from nicotine and remains a leading cause of preventable deaths, contributing to 75,000 deaths a year in France alone.

Indeed, other studies have found that while nicotine may play an initial protective role, smokers who do get Covid-19 develop more severe symptoms than nonsmokers – and comorbidities like high blood pressure and COPD, both of which are caused by smoking, seriously increase an infected person’s chance of death.

Additionally, with hospitals in many regions overwhelmed by coronavirus patients and ‘optional’ procedures like cancer screenings postponed or canceled altogether, those smokers who manage to dodge Covid-19 could find it difficult to receive treatment for other diseases their habit makes them more likely to develop.