In September, the Council will meet for the inaugural Summit of the PI in Reykjavik, Iceland, hosted by the Prime Minister of Iceland and the Left-Green Movement.

A coalition of left-leaning intellectuals, activists, and political leaders from around the world officially launched Monday the Progressive International with the support of the Democracy in Europe Movement 2025 and the Sanders Institute.

“Never before has international solidarity been more necessary—and more absent,” General Coordinator of the PI David Adler said, adding that “only a common international front can match the scale of our crises, reclaim our institutions, and defeat a rising authoritarian nationalism.”

At launch, the Progressive International is supported by an interim Council of over 40 advisors, including Iceland’s Prime Minister Katriin Jakobsdottir, intellectual Noam Chomsky, former Greek Minister of Economy Yanis Varoufakis, author Naomi Klein, and many others.

The idea was born in December 2018, when the Democracy in Europe Movement (DiEM25) and the Sanders Institute issued an open call proclaiming “it is time for progressives of the world to unite.”

On the launch of the group Monday, Chomsky in an interview with the Guardian said that the urgency created by the COVID-19 crisis has pushed deepening economic inequalities and the rise of the far-right.

So as autocratic neoliberalism stands as one way, “the other way is to try to dismantle the structures, the institutional structures that have been created; that have led to very ugly consequences for much of the population of much of the world, [and] are the source of this pandemic.”

We are at a fork in the road: either we unite with progressives around the planet in a shared struggle for justice, or we surrender to the forces of nationalism and free-market fundamentalism. @yanisvaroufakis, Greek MP and PI Council member, on the mission before us: 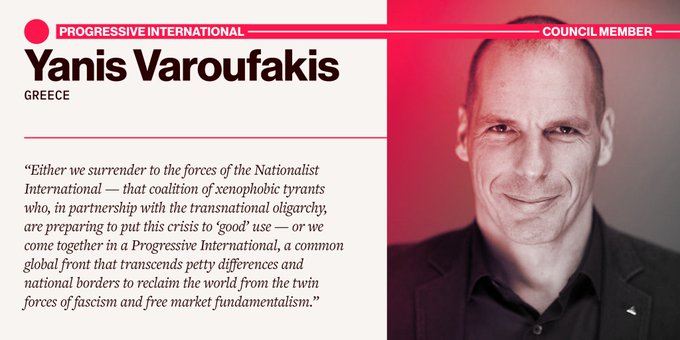 353 people are talking about this

The activities of the initiative are divided across three pillars: the movement aimed to forge a global network; the Blueprint to develop a policy blueprint for a progressive international order;  and the Wire which offers a wire service to the world’s progressive forces.

In September, the Council will meet for the inaugural Summit of the PI in Reykjavik, Iceland, hosted by the Prime Minister of Iceland and the Left-Green Movement, to analyze the challenges of the 21st century and consider proposals from the PI membership for its strategic direction.

“The ambitions of this initiative are undoubtedly high—no higher than the present crisis demands. But the Progressive International is only as powerful as its membership, and to reclaim the world after COVID-19, we will need a powerful movement of progressive forces,” Adler added, calling forces alike to join the movement.