RT.com
By Peter Andrews, Irish science journalist and writer based in London. He has a background in the life sciences, and graduated from the University of Glasgow with a degree in genetics.

FILE PHOTO ©  Global Look Press / Frank Bienewald
The world may not have to wait 12 to 18 months for a Covid-19 vaccine — scientists hope a TB shot can be adapted to fight it much more quickly. But the research so far is based on statistics, and clinical trials are still needed.

Exciting new findings suggest that the cure for the coronavirus may have been under our noses all this time. Evidence is emerging that the commonly used BCG vaccine appears to be protective against Covid-19.

Bacillus Calmette–Guérin, or BCG vaccine, is commonly used to inoculate against tuberculosis (TB). It works by delivering a boost to the immune system cells in the bone marrow, which are then released and respond to all sorts of pathogens. That helps to protect against TB, but also a host of other diseases. It is used to treat measles, malaria, bladder cancer, and it also decreases respiratory infections in older people. This general protective effect of BCG prompted the scientists to investigate whether it might work for Covid-19 as well.

And in a preprint paper that has been submitted for publication to major scientific journals, but is available for download here, scientists have found ‘’striking’’ evidence suggesting that the BCG could be co-opted for use against Covid-19. Whether a country has a BCG vaccination programme or not appears to correlate with how many Covid-19 cases they have.

Nothing seems to work

Different countries have taken drastically different approaches to the coronavirus pandemic. But there appears to be no discernable pattern across countries depending on the measures they have taken to control the virus. From Big Data-enabled lockdowns in East Asia to a laissez-faire policy in Sweden, the infected and mortality figures do not seem to correlate with the measures at all.

But at last one correlation has emerged: countries with BCG vaccination programmes are having fewer cases than those without. In this study, 178 countries were included, of which 131 have national programmes of BCG vaccination, 21 do not, and 26 have an unknown status. Interestingly, the USA and Italy are among the rich, developed countries to have never had a universal BCG programme. Spain also does not have one, but their Iberian neighbours Portugal do, and they had only 209 deaths at the time of writing. The UK ran a modest vaccination programme that ended in 2005.

Therefore, there are roughly 10 times fewer cases and deaths in countries with BCG vaccination. One of the paper’s co-authors, Dr Ashish Kamat, said that “While we expected to see a protective effect of BCG, the magnitude of the difference (almost 10 fold) in incidence and mortality (of Covid-19) between countries with and without a BCG vaccination program was pleasantly surprising.’’

This study being about a correlation, of course the ‘’not causation’’ business must be mentioned. There are a host of qualifiers and caveats to the study, which basically amount to the possibility that factors other than the BCG status are affecting the figures for cases and deaths from Covid-19 coming out of those countries. Then again, they may not be.

Vaccine development is possibly the most cautious of all scientific endeavours, which is why rolling out a new one for this coronavirus will take at least a year, and probably longer. Patients who are given the vaccine as a trial must be monitored for at least six months to check for any potential side effects, and then follow further months of data analysis and bureaucratic procedures.

Adjusting an existing vaccine, however, could happen much faster, perhaps in half the time. Professor Robert Gallo of the Institute of Human Virology in Maryland says that he and his team will shortly make a major announcement, which is likely to involve an adjusted existing vaccine being computed for coronavirus.

Meanwhile, at least seven clinical trials have been launched for BCG as a treatment for Covid-19, including ones in Australia and the Netherlands. Hopefully there is more to this study than just correlation. If there is, we might get out of this lockdown sooner rather than later.

is a journalist, writer, broadcaster and blogger. His award winning blog can be found at http://www.neilclark66.blogspot.com. He tweets on politics and world affairs @NeilClark66

Military police officers patrol the deserted Heroes’ Square as the spread of coronavirus disease (COVID-19) continues in Budapest, Hungary, April 6, 2020. © REUTERS/Bernadett Szabo
By any objective assessment, governments in the eastern half of Europe have dealt with the Covid-19 outbreak better than many in the west. Yet, because of deep-seated attitudes of superiority, few are giving credit where it’s due.

Europe is divided again, but this time not by a wall.

Compare the Covid-19 deaths worldwide per one million population, as of  April 22, by country.

You have to scroll down quite a way before you get to countries in central or eastern Europe.

Why is nobody discussing truly staggering differences in death rates between Eastern and Western Europe? In the @FT graphs none of EE countries is even included. The gap is just striking. (Worldometer, 22 April). 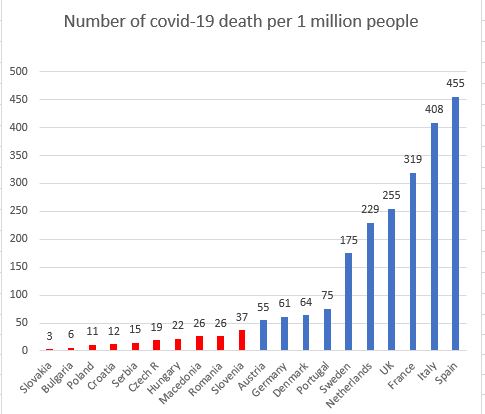 2,385 people are talking about this

How can we explain this new division of Europe? Well, it’s clear that geography has played its part. The main vector for the spread of Covid-19 has been population movements and, in particular, international air travel. More people visit western Europe than the east. There’s more coming and going. Covid-19 can be seen accurately as a virus of turbo-globalization, and western European countries are more turbo-globalised than those to the east. They also tend to be more densely populated, with some very large cities, which the virus likes, as it allows it to spread quicker.

But while eastern Europe has a number of ‘natural’ advantages, this doesn’t, I think, tell the whole story. Governments in eastern Europe have generally shown more common sense than most of their western counterparts. They quickly did the most obvious thing that you need to do when a virus has got its walking boots and rucksack on: they closed borders.

On March 12, Czechia declared a state of emergency and barred travelers from 15 countries hit by the novel coronavirus, including Iran, Italy, China and the UK. It then went into a ‘lockdown.’ On the same day Slovakia closed its borders to non-residents and imposed a mandatory quarantine for anyone returning from abroad.

Poland closed its borders on March 15 and Hungary followed suit one day later. Russia’s far east border with China had already been closed since the end of January.

Compare the decisiveness with which eastern European countries pulled up their drawbridges, with the hesitation in the west. On March 12, French President Emmanuel Macron declared “this virus has no passport”. As I wrote at the time, liberal ideology and virtue signaling were being put before public health.

The virus might not have a passport, but the people carrying it in from China, and then from Italy, most certainly did! It was only on March 17 that there were signs that western European states were going to do what their eastern neighbors had already done. “The less we travel, the more we contain the virus,” said EU Commission President Ursula von der Leyen. You don’t say!

At least western continental Europe did take some action on borders, albeit a week or so too late. Britain, by contrast, while imposing a ‘lockdown’ on domestic citizens, has continued to allow into the country unchecked flights from all over the world, including from New York, Iran and China.

Generally, they’ve been quicker to act than their western counterparts. The culture of government undoubtedly plays a part.

I lived in Hungary for several years in the 1990s and was impressed by what I call the ‘administrative class.’ The people who work for the government, the civil servants, the old communist ’bureaucracy’, if you like, were very competent. They got the job done, with a minimum of fuss. In so many ways because of this efficient administration and a very high level of general and technical education, eastern European countries are actually better-run than many in the west, particularly Britain, where incompetence seems to lead on to great rewards. Countries where there was a ‘five-year-plan’ political culture not surprisingly are better at planning than those where there wasn’t.  Or, as the old saying has it, if you fail to plan, you plan to fail.

Another legacy of the much-maligned socialist era might also have played a big part in minimizing the impact of Covid-19 in eastern Europe. As RT reported earlier in the month, ‘striking’ evidence has emerged showing that the BCG tuberculosis vaccine might be protective against Covid-19.

ALSO ON RT.COM‘Striking’ evidence emerges that TB vaccine may be effective against Covid-19 — countries that use it have TEN TIMES fewer cases

Vaccinating their populations against TB was enthusiastically taken up by the socialist-bloc countries in the 1950s and remains mandatory in many, even though communism is gone. In Russia for instance, it is still given to children from three to five days old. By contrast, the USA and Italy never had a universal BCG programme, and, while Spain doesn’t have one either, its neighbour Portugal still does, and has had only 74.11 Covid-19-related deaths per million, compared to neighboring Spain’s 455.49.

The BCG programme may yet prove to be at least among the reasons why the old state of East Germany has a lower Covid-19 death toll than the western part of the country.

Germany is the only western European country that had a ‘socialist’ half – and it’s that socialist half which has helped bring its per-capita death rate down.

Let me give you one example. On Monday evening I tweeted how Hungary had  less than 220 deaths from Covid-19, compared to the UK’s 16,000. By any objective assessment, Hungary had done better than the UK.

Hungary gets a bad press because of Orban, the ´Viktator’ but compare their Covid stats to the UK’s . Still less than 200 deaths in Hun compared to UK’s 16K. UK population 6-7 times bigger Hungary’s done better per cap. They took it more seriously, quarantined & stopped flights.

38 people are talking about this

“I guess that settles it” @JusticeTyrwhit tweeted. “Orban is actually ok then and we were wrong to oppose fascism all along….?”

Hungary gets a bad press because of Orban, the ´Viktator’ but compare their Covid stats to the UK’s . Still less than 200 deaths in Hun compared to UK’s 16K. UK population 6-7 times bigger Hungary’s done better per cap. They took it more seriously, quarantined & stopped flights.

See Order of the Coif’s other Tweets

For a certain type of superior westerner, eastern Europe’s governments can never do any good. If you say they have handled something well, you are ‘dog whistling’ your support for ‘fascism’ or ‘communism.’

ALSO ON RT.COMThis is how UK media covers Britain’s Covid-19 response & that is how it covers Russia’s (is this FAIR journalism?)

It’s time that those with the Cold War mindset of ‘Order of The Coif‘ stopped patronizing the east and showed a little more humility. For, when it comes to dealing with Covid-19,  governments in ‘backward’ eastern Europe have generally served their populations better than those in ‘advanced’ western ones.

The statements, views and opinions expressed in this column are solely those of the author and do not necessarily represent those of RT.