(Natural News) The tyranny of Big Tech is now on full display in America as Twitter has unleashed an army of so-called “fact-checkers” (i.e. left-wing propagandists) to place fact-check labels on the tweets of President Trump.

“Fact-checking” is just the excuse for tech giants like Twitter, Google, Wikipedia, YouTube or Facebook to interrupt the communications of conservative or pro-Trump users with radical left-wing propaganda messages. The very idea that a tech company led by communists and radical left-wing socialists could claim a monopoly on “facts” is absurd. No one has a monopoly on facts, and the entire fact-checking fiasco of the Big Tech ecosystem has boiled down to politically targeted censorship run by radical left-wing propagandists who are truly mentally ill in the fact that they actually believe their delusions are an accurate map of reality.

But it’s more than mere propaganda. It’s election rigging. It’s a violation of the civil rights of millions of Americans. And it’s almost certainly a type of criminal racketeering and fraud that should be aggressively prosecuted by the DOJ as well as Attorneys General across the 50 states.

Now, for the first time, after years of censorship of Trump supporters, the President himself is finally vowing to do something decisive about Big Tech tyranny. He tweets, “Twitter has now shown that everything we have been saying about them (and their other compatriots) is correct. Big action to follow!”

What “big action” could that be?

If Trump wanted to resolve this problem literally overnight, his best option is to seize the domain names of the tech giants and force them to respect the First Amendment or be shut down.

Republicans feel that Social Media Platforms totally silence conservatives voices. We will strongly regulate, or close them down, before we can ever allow this to happen. We saw what they attempted to do, and failed, in 2016. We can’t let a more sophisticated version of that….

The politically-targeted censorship of the tech giants mentioned above is, of course, criminal and fraudulent. It is election rigging, for starters, and Robert Mueller’s prosecution of so-called “Russian” content farms has already proved that the DOJ can charge tech companies with “attempt to defraud the United States of America” by interfering with elections.

But that’s only the beginning. In many cases, their politically targeted censorship is coordinated with the left-wing media. CNN broadcasts a segment demanding Facebook ban a certain channel, and Facebook complies. YouTube and Twitter usually follow in concert. This is coordinated, malicious de-platforming that’s almost always conducted for a political purpose: To silence a pro-Trump voice and thereby alter the landscape of public debate in order to eliminate Trump in the next election.

Without the freedom to speak, there can be no “fair and free” elections… all elections are null and void

Without the freedom to speak, there can be no fair and free elections.

This means that until the First Amendment is respected by the tech giants, all elections should be postponed until at least one year has passed after free speech is restored.

Put another way, if the tech giants reverse their censorship today and reinstate all the pro-Trump channels and voices that they insidiously banned over the last three years, then we could perhaps hold elections in May of 2021.

But we cannot hold fair and free elections in November of this year, as those elections have already been rigged or stolen by Big Tech censorship.

All the debates have been rigged. Only one side of every debate is allowed to exist on the Big Tech platforms. Whether you’re talking about climate change, the coronavirus, border security or abortion, there is only one side of every debate that’s called “facts,” and those so-called “facts” are determined entirely by delusional, sociopathic Leftists who run the tech giants and believe they alone have the right to decide the “truthiness” of every statement under the sun.

The very existence of these Big Tech authoritarian enforcers is irreconcilable with basic human dignity and freedom. No corporation has the right to unilaterally decide what is true, and the very invocation of “facts” is an insult to all those who understand logic and reason. Facts may be stubborn things, but they are also incredibly difficult to nail down, and when so-called “facts” are claimed to be perfectly formed by the very people whose own rage-filled emotional filters practically nullify any rational circuitry in their own brains, those “facts” turn out to be nothing more than consensus delusions.

Consensus does not determine fact, and this is especially true when the consensus is cherry picked to support a particular slant on “facts” while silencing all those with opposing views. 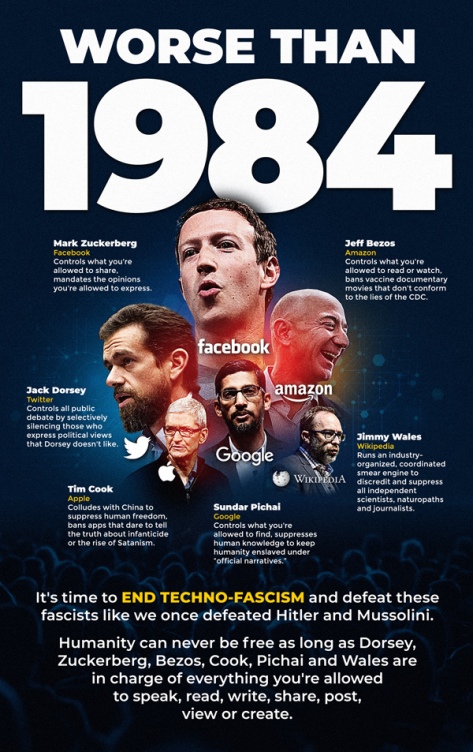 Today we call on President Trump to suspend the 2020 elections, seize the domain names of the tech giants to temporarily shut them down, and force Big Tech to respect the universal right to free speech among not just Americans but citizens around the world who use Big Tech’s platforms.

The freedom to speak is a universal right, and Big Tech’s insidious, repeated efforts to suppress free speech are a crime against humanity. Any corporation that engages in this large-scale, malicious oppression of basic human rights should either be forced to change its ways or be permanently abolished and prevented from functioning ever again.

Unless Twitter respects free speech for all its users, in other words, Twitter should be abolished and eliminated, and Jack Dorsey should face trial for his crimes against humanity.

Fair and free elections can only take place after the public has been able to experience at least a full year of a level playing field when it comes to public discussions and debates on all topics, including politics, vaccines, transgenderism, abortions, GMOs, pandemics and so on.

Finally, We the People — all of us whom are being illegally silenced and censored by Big Tech — now assert that we will not accept the outcome of the 2020 elections unless free speech is restored long before the elections take place. (Ideally, we need a full year of a level playing field before any honest elections can be held.)

The elections are being rigged every day via a coordinated criminal conspiracy among the tech giants to deprive the American people of their civil rights to engage in the very process of democracy: Debate, speech and voting.

It’s also abundantly clear that every censorship effort by the tech giants has been formulated specifically to defeat President Trump and all Republicans in the US Congress. Christians are also being systematically targeted and silenced by the radical left-leaning tech giants. Because these malicious censorship efforts are clearly so one-sided and engineered to rig all future elections, they qualify as criminal racketeering under the RICO Act.

Big Tech is, in reality, a criminal cartel of techno-fascists who routinely violate U.S. law with increasing aggressiveness. It is now abundantly clear they will never stop their crimes against America unless they are forced to stop. This means that unless humanity wants to wake up and find itself utterly enslaved, living in an Orwellian authoritarian nightmare run by lunatic Leftists who celebrate the murder of babies and the chemical neutering of children under the label of “transgenderism,” we must all rise up and abolish Big Tech with a sense of urgency.

The tech giants must be dismantled and permanently abolished. They must never be allowed to rise up again and concentrate the power of speech in the hands of the few. The CEOs and top managers of all the tech giants who have engaged in this criminal behavior must be arrested and prosecuted, then punished accordingly.

– Big Tech platforms, including Wikipedia, Google, Facebook, Twitter and YouTube, are engaged in a criminal conspiracy against the United States of America to selectively censor conservative, Christian and pro-Trump voices in an effort to rig all future elections and control the allowable arguments in every debate.

– The U.S. government must seize the domain names of all the tech giants to halt their crimes against the American people. The domain names may be returned once those corporations sign a consent decree in which they agree to reverse all their free speech censorship and allow speech freedom on their platforms.

– The 2020 elections must be postponed until mid-2021 in order to allow free speech to be restored in America so that open debates can be allowed to take place, contributing to “fair and free” elections.

– Knowing that Big Tech is actively working to rig the 2020 elections with politically targeted censorship, if the 2020 elections are allowed to take place, We the People withdraw our consent from recognizing the “winners” of that rigged election.

– Unless free speech is restored, the 2020 elections are already null and void, and the American people should universally withhold any recognition of the outcome of the 2020 election while demanding the restoration of free speech, public debate and the freedom to think as the necessary pillars for any resumption of democratic elections.

NOTE: Facebook will prohibit you from sharing this story from the NaturalNews.com domain. That’s part of their criminal conspiracy: Censor those who are pointing out their crimes against humanity. To share this story, first go to Banned.news:

Find more news about censorship and free speech at Banned.news.